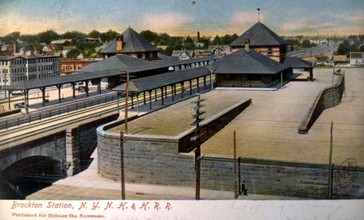 Brockton, Massachusetts train station on a 1906-postmarked postcard. This view looks approximately northwest; Centre Street is in the foreground. by Unknown author is licensed under Public domain

Brockton is a city in Plymouth County, Massachusetts, United States; the population was 95,314 in the 2015 Census.

Brockton, along with Plymouth, are the county seats of Plymouth County. Brockton is the seventh largest city in Massachusetts and is sometimes referred to as the "City of Champions", due to the success of native boxers Rocky Marciano and Marvin Hagler, as well as its successful Brockton High School sports programs. Two of the villages within the city are Montello and Campello, both have the distinction of having their own MBTA Commuter Rail Stations and post offices. Campello is the smallest neighborhood in the city, but also the most populous. Brockton hosts a baseball team, the Brockton Rox. Brockton is one of the windiest cities in the United States, with an average wind speed of 14.3 mph.

Brockton has three hospitals, Signature Healthcare Brockton Hospital on the east side, Good Samaritan Medical Center - a Steward Family Hospital (formerly Caritas Good Samaritan, and before that Cardinal Cushing) Hospital to the northwest, and the Brockton Veterans Administration Hospital to the southwest. The VA Hospital is the sponsoring institution for the Harvard South Shore Psychiatry program. It serves as a teaching facility for residents of various medical specialties from Boston University, physician assistant students from Northeastern University, nursing students from the University of Massachusetts Boston and pharmacy students from the Massachusetts College of Pharmacy and Health Sciences.

Brockton has a community health center that serves individuals with low income and poor access to health care at Brockton Neighborhood Health Center.

Brockton has its own bus services, operated by the Brockton Area Transit Authority (BAT). Each bus has a designated route running through a section of Brockton, i.e. Montello, Campello, Cary Hill, etc. There are also buses that have routes outside the city. i.e. Bridgewater Industrial Park, Ashmont Station (MBTA subway end-of-line), Stoughton and a connecting bus stop in Montello to the Braintree Station (MBTA subway end-of-line).

The Middleborough/Lakeville Line of the MBTA's commuter rail system passes through the city on the eastern side, with stops in the Montello and Campello neighborhoods, as well as in the city center, providing service to points south and South Station in Boston north of the city.

Brockton used to be a good city. Currently there are instances of shootings in most parts of the city. Also drug use. I would not recommend anyone moving there which people do because housing is reasonable compared to neighboring towns.

Brockton is age friendly due to its diverse nature and culture. Whether its Haitians, Cape Verdians, or people from other countries we were all raised to respect our elders. We've always held elders high in our cultures.

Learn more about taxes in Massachusetts

Would you recommend Brockton, MA to your older friends and family?

Detailed reviews require a rating for each category. When you complete these category ratings, you help others better understand what makes Brockton, MA age-friendly.

Your overall rating for Brockton, MA

Thanks for posting your Review. Will you help others understand what makes Brockton, MA age-friendly by providing a bit more detail to your rating?

Would you recommend Brockton, MA to your older friends and family?
Please tell us why or why not.