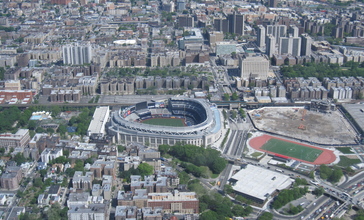 Yankee Stadium by Gryffindor is licensed under CC BY-SA 3.0

The Bronx is the northernmost of the five boroughs of New York City, in the U.S. state of New York.

It is south of Westchester County; north and east of Manhattan, across the Harlem River; and north of Queens, across the East River. Since 1914, the borough has had the same boundaries as Bronx County, the third-most densely populated county in the United States.

The Bronx has a land area of 42 square miles (109 km2) and a population of 1,471,160 in 2017. Of the five boroughs, it has the fourth-largest area, fourth-highest population, and third-highest population density. It is the only borough predominantly on the U.S. mainland. The Bronx is divided by the Bronx River into a hillier section in the west, and a flatter eastern section. East and west street names are divided by Jerome Avenue—the continuation of Manhattan's Fifth Avenue. The West Bronx was annexed to New York City in 1874, and the areas east of the Bronx River in 1895.

Bronx County was separated from New York County in 1914. About a quarter of the Bronx's area is open space, including Woodlawn Cemetery, Van Cortlandt Park, Pelham Bay Park, the New York Botanical Garden, and the Bronx Zoo in the borough's north and center. These open spaces are situated primarily on land deliberately reserved in the late 19th century as urban development progressed north and east from Manhattan.

The name "Bronx" originated with Jonas Bronck, who established the first settlement in the area as part of the New Netherland colony in 1639.

The native Lenape were displaced after 1643 by settlers. In the 19th and 20th centuries, the Bronx received many immigrant and migrant groups as it was transformed into an urban community, first from various European countries (particularly Ireland, Germany, and Italy) and later from the Caribbean region (particularly Puerto Rico, Haiti, Jamaica, and the Dominican Republic), as well as African American migrants from the southern United States. This cultural mix has made the Bronx a wellspring of Latin music hip hop and rock.

The Bronx contains one of the five poorest Congressional Districts in the United States, the 15th, but its wide diversity also includes affluent, upper-income and middle-income neighborhoods such as Riverdale, Fieldston, Spuyten Duyvil, Schuylerville, Pelham Bay, Pelham Gardens, Morris Park, and Country Club.

The Bronx, particularly the South Bronx, saw a sharp decline in population, livable housing, and the quality of life in the late 1960s and the 1970s, culminating in a wave of arson. Since then the communities have shown significant redevelopment starting in the late 1980s before picking up pace from the 1990s until today.

Accessible to stores and transportation

I am very reliable dedicated I have reliable transportation I'm hardworking and I went to school to become a nurse .

The quality of life of older adults is greatly influenced by the overall quality of life — and the availability of needed and appropriate infrastructure and services — in the area where they live.

The community is people friendly and has diversity and retired people Transportation is easily accessible by train ,bus,accessible a ride ,local taxes.You can hire qualified home care attendants.

Would you recommend Bronx, NY to your older friends and family?

Detailed reviews require a rating for each category. When you complete these category ratings, you help others better understand what makes Bronx, NY age-friendly.

Your overall rating for Bronx, NY

Thanks for posting your Review. Will you help others understand what makes Bronx, NY age-friendly by providing a bit more detail to your rating?

Would you recommend Bronx, NY to your older friends and family?
Please tell us why or why not.