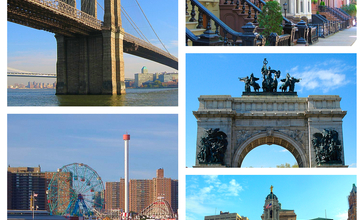 Brooklyn NY Photo Collage by Unknown author is licensed under CC BY 2.5

Brooklyn is the most populous borough of New York City, with a census-estimated 2,648,771 residents in 2017.

Named after Dutch village of Breukelen, it borders the borough of Queens at the southwestern end of the same Long Island, and has several bridge connections to the nearby boroughs of Staten Island and Manhattan. Since 1896, the borough has been coterminous with Kings County, the most populous county in the U.S. state of New York and the second-most densely populated county in the United States, after the county of New York (which is coextensive with the borough of Manhattan).

With a land area of 71 square miles (180 km2) and water area of 26 square miles (67 km2), Kings County is New York's fourth-smallest county by land area and third-smallest by total area, though it is the second-largest among the city's five boroughs.

Today, if New York City dissolved, Brooklyn would rank as the third-most populous city in the U.S. after Los Angeles and Chicago. Brooklyn was an independent incorporated city (and previously an authorized village and town within the provisions of the New York State Constitution) until January 1, 1898, when, after a long political campaign and public relations battle during the 1890s, according to the new Municipal Charter of "Greater New York", Brooklyn was consolidated with the other cities, boroughs, and counties to form the modern "City of New York," surrounding the Upper New York Bay with five constituent boroughs.

The borough continues, however, to maintain a distinct culture. Many Brooklyn neighborhoods are ethnic enclaves. Brooklyn's official motto, displayed on the Borough seal and flag, is Eendraght Maeckt Maght which translates from early modern Dutch as "Unity makes strength". In the first decades of the 21st century, Brooklyn has experienced a renaissance as an avant garde destination for hipsters, with concomitant gentrification, dramatic house price increases, and a decrease in housing affordability.

Since 2010, Brooklyn has evolved into a thriving hub of entrepreneurship and high technology startup firms, and of postmodern art and design.

The opportunity's around are a plus there's trains buses and car services surrounding us . Only 15min from downtown train ride . The community looks out for eachother majority of the time . There's all stages of schooling within the neighborhood. The community is very diverse . It's fairly quiet and has a great park with long ( sunset park )

Area is nice and calm

Accessibility to doctors appointments, shopping areas, laundry etc. A lot of public transportion is in the area. There are also community centers and adult
daycares.

The many options for transportation and the diversity.

Everything is around here from organic food stores to commercial food stores, restaurants, bars, activities, Barclays center, nature, and more

Would you recommend Brooklyn, NY to your older friends and family?

Detailed reviews require a rating for each category. When you complete these category ratings, you help others better understand what makes Brooklyn, NY age-friendly.

Your overall rating for Brooklyn, NY

Thanks for posting your Review. Will you help others understand what makes Brooklyn, NY age-friendly by providing a bit more detail to your rating?

Would you recommend Brooklyn, NY to your older friends and family?
Please tell us why or why not.