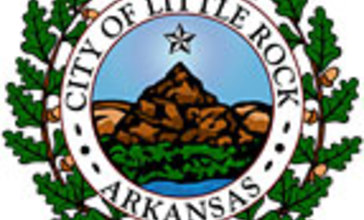 Little Rock is the capital and most populous city of the U.S. state of Arkansas. It is also the county seat of Pulaski County. It was incorporated on November 7, 1831, on the south bank of the Arkansas River close to the state's geographic center. The city derives its name from a rock formation along the river, named "la petite roche" by the French explorer Jean-Baptiste Bénard de la Harpe in the 1720s. The capital of the Arkansas Territory was moved to Little Rock from Arkansas Post in 1821. The city's population was 193,524 at the 2010 census. The six county Little Rock-North Little Rock-Conway, AR Metropolitan Statistical Area (MSA) is ranked 75th in terms of population in the United States with 724,385 residents according to the 2013 estimate by the United States Census Bureau. Little Rock is a cultural, economic, government, and transportation center within Arkansas and the South. Several cultural institutions are in Little Rock, such as the Arkansas Arts Center, the Arkansas Repertory Theatre, and the Arkansas Symphony Orchestra, in addition to the hiking, boating, and other outdoor recreational opportunities. Little Rock's history is available through history museums, historic districts or neighborhoods like the Quapaw Quarter, and historic sites such as Little Rock Central High School. The city is the headquarters of Dillard's, Windstream Communications, Acxiom, Stephens Inc., University of Arkansas for Medical Sciences, Heifer International, the Clinton Foundation, and the Rose Law Firm. Other large corporations, such as Dassault Falcon Jet and LM Wind Power have large operations in the city. State government is a large employer, with many offices being in downtown Little Rock. Two Interstate highways, Interstate 30 and Interstate 40, meet in Little Rock, with the Port of Little Rock serving as a shipping hub.

Nice and quiet and age friendly

It's just a really great area to live in

Food deserts and crime. There is a lack of healthy food stores close by and too much crime.

How did Arkansas earn the grade of C+? We examined the state taxes based on how age friendly they are. Arkansas has a state sales tax of 6.50%. Of particular interest is that Arkansas does not have taxes on social security. There are no estate taxes. There are no taxes imposed on inheritance. Arkansas has an effective property tax rate of 0.63%. Weighing these taxes and other taxes most likely to impact the aging population is how Arkansas earned its state tax grade of C+.

Learn more about taxes in Arkansas

Would you recommend Little Rock, AR to your older friends and family?

Detailed reviews require a rating for each category. When you complete these category ratings, you help others better understand what makes Little Rock, AR age-friendly.

Thanks for posting your Review. Will you help others understand what makes Little Rock, AR age-friendly by providing a bit more detail to your rating?

Would you recommend Little Rock, AR to your older friends and family?
Please tell us why or why not.