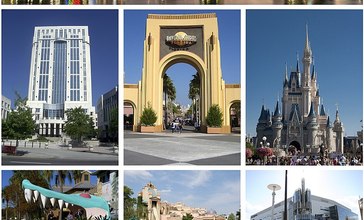 Orlando is a city in the U.S. state of Florida and the county seat of Orange County.

As of 2015, Orlando had an estimated city-proper population of 270,934, making it the 73rd-largest city in the United States, the fourth-largest city in Florida, and the state's largest inland city.

The City of Orlando is nicknamed "The City Beautiful", and its symbol is the fountain at Lake Eola. Orlando is also known as "The Theme Park Capital of the World" and in 2016 its tourist attractions and events drew more than 68 million visitors.

The Orlando International Airport (MCO) is the thirteenth-busiest airport in the United States and the 29th-busiest in the world. As one of the world's most visited tourist destinations, Orlando's famous attractions form the backbone of its tourism industry. the two most significant of these attractions are Walt Disney World, opened by the Walt Disney Company in 1971, and located approximately 21 miles (34 km) southwest of Downtown Orlando in Bay Lake; and the Universal Orlando Resort, opened in 1999 as a major expansion of Universal Studios Florida.

With the exception of Walt Disney World, most major attractions are located along International Drive. The city is also one of the busiest American cities for conferences and conventions; the Orange County Convention Center is the second-largest convention facility in the United States. Like other major cities in the Sun Belt, Orlando grew rapidly from the 1980s up into the first decade of the 21st century. Orlando is home to the University of Central Florida, which is the largest university campus in the United States in terms of enrollment as of 2015.

In 2010, Orlando was listed as a "Gamma−" level global city in the World Cities Study Group's inventory. Orlando ranks as the fourth-most popular American city based on where people want to live according to a 2009 Pew Research Center study.

Age Friendly Anonymous User
Age Friendly Anonymous User
Orlando, FL
Orlando
Yes i will love to move to Orlando because my husband live there iam experience home health care since 2012 i love i don't want to give hup cause i like it. I also liability insurance i also have reference from my jobs iam a professional worker please do call me I'm interesting working for you guy's thank you it's me shelda hope to hear from you soon as possible have a nice evening
Upvote 0
Downvote 0