Care Articles Jobs Waterbury, How Are We Doing? 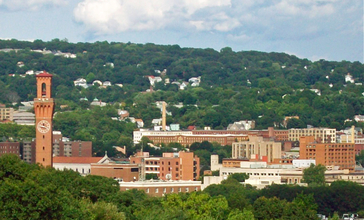 Share:
Care Articles Jobs Waterbury, How Are We Doing?

Waterbury is a city in the U.S. state of Connecticut on the Naugatuck River, 33 miles southwest of Hartford and 77 miles northeast of New York City.

Waterbury is the second-largest city in New Haven County, Connecticut. As of the 2010 census, Waterbury had a population of 110,366, making it the 10th largest city in the New York Metropolitan Area, 9th largest city in New England and the 5th largest city in Connecticut.Throughout the first half of the 20th century, Waterbury had large industrial interests and was the leading center in the United States for the manufacture of brassware (including castings and finishings), as reflected in the nickname the "Brass City" and the city's motto Quid Aere Perennius? ("What Is More Lasting Than Brass?"). It was also noted for the manufacture of watches and clocks. The city is along Interstate 84 (Yankee Expressway) and Route 8 and has a Metro-North railroad station with connections to Grand Central Terminal. Waterbury is also home to Post University and the regional campuses of the University of Connecticut, University of Bridgeport, Western Connecticut State University as well as Naugatuck Valley Community College.

Fire department
The city of Waterbury is protected by the paid, full-time firefighters of the Waterbury Fire Department (WFD). The department currently operates out of nine fire stations located throughout the city.

James Palomba
James Palomba
Town Plot, Waterbury, CT
Waterbury
Waterbury has everything to offer that a City should Waterbury offers easy driving, convenient stores and shops, and friendly neighborhood people who are willing to help one another
Upvote 0
Downvote 0

Adrian Frontiero
Adrian Frontiero
Waterbury, CT
Waterbury
Waterbury is somewhat age friendly because while most people care for the elderly, some are rude in ways at the grocery stores for example.
Upvote 0
Downvote 0

Learn more about taxes in Connecticut

Would you recomended Waterbury, CT to your older friends and family?

Detailed reviews require a rating for each category. When you complete these category ratings, you help others better understand what makes Waterbury, CT age friendly.

Your overall rating for Waterbury, CT

Thanks for posting your Review. Will you help others understand what makes Waterbury, CT age friendly by providing a bit more detail to your rating?