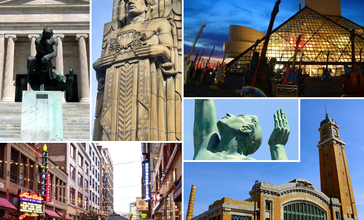 Montage of Cleveland by Montage by Levdr1lp is licensed under CC BY 2.0

Cleveland is a city in the U.S. state of Ohio, and the county seat of Cuyahoga County, the state's second most-populous county.

The city is located on the southern shore of Lake Erie, approximately 60 miles (100 kilometers) west of the Pennsylvania state border. It was founded by European Americans in 1796 near the mouth of the Cuyahoga River. It became a manufacturing center due to its location on the river and the lake shore, as well as being connected to numerous canals and railroad lines. Cleveland's economy has diversified sectors that include manufacturing, financial services, healthcare, and biomedical. Cleveland is also home to the Rock and Roll Hall of Fame. Residents of Cleveland are called "Clevelanders". Cleveland has many nicknames, the oldest of which in contemporary use being "The Forest City".

Cleveland is home to a number of leading hospital systems, several of which are in University Circle. Most notable is the world-renowned Cleveland Clinic, which is supplemented by University Hospitals and its Rainbow Babies & Children's Hospital. On the city's West Side is the main campus of the MetroHealth System, which operates a level one trauma center in northeast Ohio, and has various locations throughout greater Cleveland. Cleveland's Global Center for Health Innovation opened with 235,000 square feet (21,800 m2) of display space for healthcare companies across the world. To take advantage of the proximity of universities and other medical centers in Cleveland, the Veterans Administration moved the regions VA hospital from suburban Brecksville to a new facility in University Circle.

Consent decree with Department of Justice

In December 2014, the United States Department of Justice announced the findings of a two-year investigation, prompted by a request from Mayor Frank Jackson, to determine whether the Cleveland Police engaged in a pattern of excessive force. After reviewing nearly 600 use-of-force incidents from 2010 to 2013, the investigators found systemic patterns, insufficient accountability mechanisms, inadequate training, ineffective policies, and inadequate community engagement. As a result of the Justice Department report, the city agreed to a consent decree to revise its policies and implement new independent oversight over the police force.

The consent decree, released on May 26, 2015, mandates sweeping changes in training for recruits and seasoned officers, developing programs to identify and support troubled officers, updating technology and data management practices, and an independent monitor to ensure the decree's goals are met. At least some of the provisions have been identified as unique to Cleveland. On June 12, 2015, Chief U.S. District Judge Solomon Oliver Jr. approved and signed the consent decree, beginning the process of police reform.

Cleveland is served by the firefighters of the Cleveland Division of Fire, established in 1863. The fire department operates out of 22 active fire stations throughout the city in five battalions. Each Battalion is commanded by a Battalion Chief, who reports to an on-duty Assistant Chief.

Cleveland EMS is operated by the city as its own municipal third-service EMS division. Cleveland EMS is the primary provider of Advanced Life Support and ambulance transport within the city of Cleveland, while Cleveland Fire assists by providing fire response medical care. Although a merger between the fire and EMS departments was proposed in the past, the idea was subsequently abandoned.

It's kind of a high rate of crime

Leadership is visible. The community is informed of programs and concerns thru a monthly magazine.

The community is quiet, neighbors are friendly and helpful, residents care about keeping lawn clean, neat, and cut. Nearby stores and with friendly owners. Councilman is involved with the community.

I've lived here in this city all of my life (I'm 57 years young). I've seen this city when it was just jumping like New York does today still. It was so much happening here, some of the suburban cities that are garbage now was once prominent. After all that Cleveland has encountered negatively we are still standing and I have a great time. I use to work at the post office as a casual (temporary) letter carrier and I learned how the addresses function within the city which I found enlightening . I retired within the last few years from RTA ( paratransit operator) you'll be surprised how many people don't know how to read a map but I learned that from my former employer as well as how to maneuver through the city in a sufficient time frame. Among other things that I have experienced since living here, I have my very own home that I truly love (if I could pick it up and move it that would be awesome) and I wouldn't change it for nothing in the world. Although we have yet to experience the proper leadership of this great city I still believe that there is hope in that aspect otherwise I have no problem with Cleveland Ohio. It is my home sweet home 🙂😁😍😃😀😉😇💞💘👍

Would you recommend Cleveland, OH to your older friends and family?

Detailed reviews require a rating for each category. When you complete these category ratings, you help others better understand what makes Cleveland, OH age-friendly.

Your overall rating for Cleveland, OH

Thanks for posting your Review. Will you help others understand what makes Cleveland, OH age-friendly by providing a bit more detail to your rating?

Would you recommend Cleveland, OH to your older friends and family?
Please tell us why or why not.