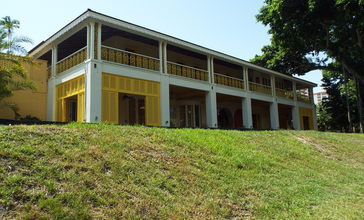 The Bonnet House was built in 1895 and is located at 900 Birch Road in Fort Lauderdale, Florida. In 1919, the owner, Hugh Taylor Birch, gave the property to his daughter Helen and artist Frederic Clay Bartlett as a wedding gift. The property was listed in the National Register of Historic Places on July 5, 1984; reference #84000832. by Marine 69-71 is licensed under CC BY-SA 4.0

Greater Fort Lauderdale, encompassing all of Broward County, hosted 12 million visitors in 2012, including 2.8 million international visitors. In 2012, the county collected $43.9 million from the 5% hotel tax it charges, after hotels in the area recorded an occupancy rate for the year of 72.7 percent and an average daily rate of $114.48.

William Lauderdale was the commander of the detachment of soldiers who built the first fort. However, development of the city did not begin until 50 years after the forts were abandoned at the end of the conflict.

Three forts named "Fort Lauderdale" were constructed: the first was at the fork of the New River, the second was at Tarpon Bend on the New River between the present-day Colee Hammock and Rio Vista neighborhoods, and the third was near the site of the Bahia Mar Marina.

I currently plan on moving to Fort Lauderdale in sunrise area because I love the weather. How friendly the people are and how close everything is each other.

There are available parks that a seasoned person can go to walk, enjoy free concerts, play dominoes,

Would you recommend Fort Lauderdale, FL to your older friends and family?

Detailed reviews require a rating for each category. When you complete these category ratings, you help others better understand what makes Fort Lauderdale, FL age-friendly.

Thanks for posting your Review. Will you help others understand what makes Fort Lauderdale, FL age-friendly by providing a bit more detail to your rating?

Would you recommend Fort Lauderdale, FL to your older friends and family?
Please tell us why or why not.