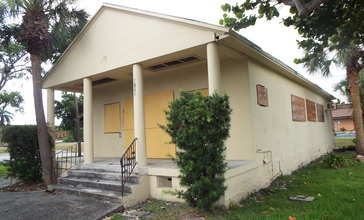 The Hollywood Garden Club building was built in 1950 and is located at 2940 Hollywood Boulevard in Hollywood, Florida. The building, which is in a total state of abandonment, was listed in the National Register of Historic Places on February 15, 2005; reference #05000052. by Marine 69-71 is licensed under CC BY-SA 4.0

For the city in Florida with movie studios similar to Hollywood, Los Angeles, CA, see Orlando.

Hollywood is a city in Broward County, Florida, located between Fort Lauderdale and Miami. The average temperature is between 68 and 83°F. As of July 1, 2015 Hollywood has a population of 149,728. Founded in 1925, the city grew rapidly in the 1950s and 1960s, and is now the twelfth-largest city in Florida. Hollywood is a principal city of the Miami metropolitan area, which was home to an estimated 6,012,331 people at the 2015 census.

According to the United States Census Bureau, the city has a total area of 30.8 square miles (80 km2), of which 27.34 square miles (71 km2) is land and 3.46 square miles (9 km2) is covered by water (11.23%). Hollywood is in southeastern Broward County, and includes about 5 to 6 miles (8.0 to 9.7 km) of Atlantic Ocean beach, interrupted briefly by a portion deeded to Dania Beach. It is bounded by these municipalities:

Hollywood is served by Fort Lauderdale-Hollywood International Airport, the 22nd busiest airport in the United States.[65] Broward County Transit operates several bus routes that pass through the city of Hollywood, such as the 1 on US 1 (Federal Highway).[66] It is also served by Tri-Rail stations at Sheridan Street and Hollywood.

i said friendly because everyone looks out for each other and having children being able to be outdoors not having to look over their shoulder with doubts.

There's a lot of schools near by and slots of bus stops .

This town has all availability.

by By David Freitag
MONEY

Would you recommend Hollywood, FL to your older friends and family?

Detailed reviews require a rating for each category. When you complete these category ratings, you help others better understand what makes Hollywood, FL age-friendly.

Your overall rating for Hollywood, FL

Thanks for posting your Review. Will you help others understand what makes Hollywood, FL age-friendly by providing a bit more detail to your rating?

Would you recommend Hollywood, FL to your older friends and family?
Please tell us why or why not.