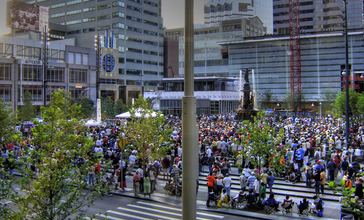 Cincinnati is a city in the U.S. state of Ohio and seat of Hamilton County. Settled in 1788, the city was located at the north side of the confluence of the Licking River to the Ohio.

The city drives the Cincinnati–Middletown–Wilmington combined statistical area, which had a population of 2,172,191 in the 2010 census. With a population of 298,800, Cincinnati is the third-largest city proper in Ohio and the 65th-biggest in the United States. It is the fastest growing economic power in the Midwestern United States and the 28th-biggest metropolitan statistical area in the United States. Cincinnati is also within one day's drive of two-thirds of the United States populace.
In the nineteenth century, Cincinnati was an American boomtown in the heart of the country; it rivaled the larger coastal cities in size and wealth. Throughout much of the 19th century, it was listed among the top 10 U.S. cities by population, surpassed only by New Orleans and the older, established settlements of the United States eastern seaboard; and sixth-biggest city for a period spanning reports from 1840 until 1860. As Cincinnati was the first city founded after the American Revolution as well as the first major inland city in the country, it is thought of as the first purely "American" city.

Cincinnati developed with fewer European immigrants or influence than eastern cities attracted in the same period; however, it received a significant number of German immigrants, who founded many of the city's cultural institutions. By the end of the 19th century, with the shift from steamboats to railroads drawing off freight shipping, trade patterns had altered and Cincinnati's growth slowed considerably. The city was surpassed in population by other inland cities, particularly Chicago, which developed based on commodity exploitation and the railroads, and St. Louis, for decades after the Civil War the gateway to westward migration.

I have experience working with the elderly and the disabled population.

Im new to ohio, one year. I moved from California west coast where ive lived for 59 years+. Where i bought my house seem fine to live.

I cannot speck to the community/location itself, I can only speak to the quality of care I am willing to give to the elderly community in need of compassionate care and understanding.

This place is age friendly because no matter the age, everyone has a resource to things they may need and their are events every now and then for everyone in the neighborhood to enjoy fellowship.

Never had issues, though Im only 55

Would you recommend Cincinnati, OH to your older friends and family?

Detailed reviews require a rating for each category. When you complete these category ratings, you help others better understand what makes Cincinnati, OH age-friendly.

Your overall rating for Cincinnati, OH

Thanks for posting your Review. Will you help others understand what makes Cincinnati, OH age-friendly by providing a bit more detail to your rating?

Would you recommend Cincinnati, OH to your older friends and family?
Please tell us why or why not.